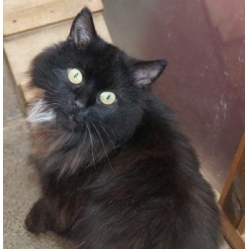 I first heard about Danny in late January 2016 when I was contacted by a kind lady who had been feeding him as a stray for some weeks in the village where she lives. She was concerned about him as his long coat was so matted and he needed neutered. Although he came close to her for food he was too shy to let her touch him. I said I would arrange to trap him for neutering just as soon as I could. However, following his photograph appearing on a social media Lost/Found cat site, a couple from a nearby town thought he might be their unneutered tom cat who had been missing for some months. The feeder borrowed a trap from another charity, caught him and he was taken away by the couple who thought he might be their cat.  However, when they got him home they realised he wasn’t their missing cat and, because he’d been let out of the carrier, he went into hiding in their house, escaping a couple of days later. He was now in a town he didn’t know and completely lost. We heard what had happened and set about trying to track him down. It took three weeks of putting out flyers and posters but, thanks mainly to an article in the local newspaper, a call came in from a woman who was quite certain he was hanging around her street. It took another five nights to get him into a trap but eventually he was caught and came back to our shelters. My gut feeling was that this wasn’t a cat born outside and never handled but rather one that had once had a home but had either been lost (which happens so often to unneutered tom cats) or had been deliberately abandoned by his people. His fear and mistrust of people was perfectly understandable. The poor wee love was just so scared and would smack at my hand if it went anywhere near him but time has passed and Danny has shown his true colours. For quite some time now he has come come running to greet me whenever I enter the shelters, rubbing his face and body against my legs and asking to be stroked. When I pass him, he gently taps me with his paw just to say hello. His coat had been in a real mess, thick with matted ingrained fur that had had to be shaved off when he was being neutered, but it’s looking good now and he knows it! Danny still gets a bit alarmed when I reach out towards his face. I dare say he has good historical reason for being afraid, so I always approach him from the back when stroking him and he loves and accepts that.

The right home for handsome Danny would be with experienced cat people, people who understand and accept that he has had very good reason not to put his trust in people and will give him the time and patience he would need to get used to a new environment. Without a doubt he would regress a bit when he goes on to a proper home, but he wouldn’t go back to being that terrified little soul he was after his ordeal back in February. Of course Danny has now been neutered and he is vaccinated a nd microchipped. All he needs now is the right kind of people to share his life with. UPDATE ON DANNY'S SITUATION: At the beginning of August 2016 Danny was offered a home with a couple in a rural situation near Bathgate, West Lothian. However, despite promising to keep him indoors until he was very well settled Danny was let out after a very short time indeed and has been missing ever since. We have been searching for him since then, distributing posters throughout the area and beyond, including to vets and farms. We refuse to give up on finding poor Danny and that's why we're keeping him on both our website and the CatChat page.