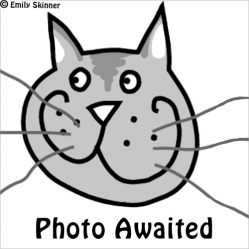 Real beauties, tlc needed
We sometimes know of, of have in our care, cats whose unfortunate start in life has led to them often being referred to as 'feral' or 'semi-feral'.  This is purely down to their early circumstances, including being born to a cat thrown out by uncaring and irresponsible owners and so often lucky to even survive and especially if something happens to the poor mum resulting in them struggling even more for enough food to stay alive.  They have often never been touched by humans, though this definitely doesn't mean that they will never be happy with this.  Even if not, so many go on to develop a real bond with those they learn to trust.  We know of three such cats now.  They are all females and have all been neutered, which is one of our strong beliefs.  They are the sort of cats that most traditional rescues would not want to take on board, which we understand.  However, to see them put weight on, from the 2 kg they were roughly when we first came across them, for their coats to go from being a total mess to being shiny and glossy, to see them all sniffing fingers and for one especially to now give nose bumps, is truly heartwarming, to say the least.  They are safe where they are and enjoying regular food and interaction with other cats too, which is brilliant to see.  Obviously, we would love to find them, separately or together, a placement with the right kind of people in the right kind of location.  Though they have had to survive in the past by living outside, in the right hands there is nothing to say that this has to be the way they live in the future.  If ever you would like a chat, obviously with no commitment at all on your part, please do let us know.; there is nothing to lose at all.  Thank you.
Information
When contacting us, please mention that you found us through our Cat Chat Homing Page - thank you!