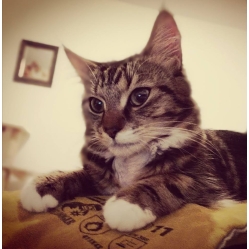 We're after a very special, experienced home for this stunning but feisty young lady.

Little Maddie is still less than a year old. She came to us from a family with a number of small children, and she would seem to have had quite a hard time with them - on arrival, she was displaying a lot of aggression: growling, hissing, swearing and lashing out if anyone trespassed into her personal space.

Her foster mum spotted a desperate craving for affection behind all the posturing though, and only a couple of weeks later, you'd barely recognise her. Thanks to quiet, calm and consistent treatment, a refusal to back down when she lashed out, a solid and clear routine, Feliway, catnip, and gauntlets (!), she's now an affectionate, purring and playful little girl - *most of the time*.

She is progressing at a staggering speed, but is still a project cat who will need continued patience, kindness and consistency, but we feel she needs her forever humans sooner rather than later, so that she builds a bond with them rather than with her fosterer.

Because of her prior behaviour, her new home MUST meet the following criteria (for her own good and for yours!):
- No children of primary age or younger.
- Quiet, stable home with a stable routine.
- Safe outside space where she is unlikely to come across too many people - she WILL go up for a fuss, and there is always the risk that she may lash out if they overstep the mark, which won't be popular!
- Someone who understands and is willing to tolerate that she may turn unexpectedly if something upsets her, at least in the short term; someone who doesn't mind needing the odd plaster and antiseptic treatment in the pursuit of what will be an absolute gem of a cat, given the right investment.
- She's also likely to be something of a hunter, so someone that doesn't mind too much having to rescue furry presents in future.

In her favour, she has lived with a dog, so a cat-accustomed dog that won't spook her should be OK, and she should be OK with a calm, confident, friendly cat, as she retreated when her foster's cats encountered her and were quite rude to her.