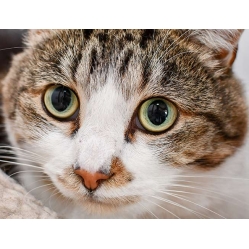 Alfie (& Ollie)
Alfie was in a really bad state when we came across him.  He looked bedraggled, skinny and sad, as well as poorly.  Apparently, he had been in the area he was living in for at least a few months, and would get fed whenever he was seen by a kind couple who felt very sorry for him.  This was only now and again but they did manage to get photos of him and circulated these to try to find his owner.  Later, it emerged that he was not chipped, not neutered either, which do not suggest a respected, loved pet who was well cared for, to put it mildly.  Several established groups were contacted before LPCR was, but nobody could help; there are so many innocent, 'discarded' needy cats, nobody can help them all, even those with great resources.  We were contacted because the lovely couple had seen a clear decline in Alfie's condition, to the point where he was picking at the food offered, rather than his usual gobbling.  This often means that a cat is being fed elsewhere of course but his manner and his general condition made the kind people think this was unlikely.  Once we saw Alfie, we knew we had to do something because he was clearly in great distress.  At the time, it was a daunting prospect to be honest, financially speaking, but I knew there was no choice.  Though weak, Alfie had to be trapped, as he was very, very wary.  A thorough health check and blood tests followed.  It was found that Alfie had a virus which was why he was looking and feeling so rotten.  He was given medication to make him feel a bit better and hopefully to make him want to eat.  As it turned out, this perked him up a little but he had to go back to the vets twice more to get him on his feet again.  Once he was eating well and had put on weight, another health check confirmed that he was fit enough to be neutered and also rehomed.  Featuring him was delayed so that his confidence could be built up which is has been, a lot.  On to today, Alfie is probably around five years old, his fur is slightly longer than short haired and is very soft.  He now loves being stroked.  He has a lovely personality which is very endearing; he often looks like a bewildered child, rather dazed, but not when it comes to food!  Alfie loves his food so much and it usually disappears very quickly indeed.  He is often playful and he gets on well with most of the other foster cats.  However, he has proved he can be a bit of a bully with one other in particular - so they are no longer ever together as this is fairest all round.  He gets on especially well with one or two others and actually shares a living space with Ollie and is happy with him too.  When I am with him and Ollie, moving around to sort things out, Alfie is usually moving around rubbing against me and purring away.  He is a real treasure, as Ollie, who also loves giving nose bumps as well as patting your hair, is.  Alfie will often walk alongside his side, rubbing against him as they move, it is a joy to see.  It would be fantastic if Alfie and Ollie could find a home together, as they do seem to have a good bond. In fact now, it is intended that these two beautiful boys will be homed together.  It is not known if Alfie and Ollie have ever had a proper home but they are two little loves who are certainly longing for one now.  I think it may take quite a long time for the boys to settle when they are moved but to the right owners this won't matter at all.  They will be rewarded with two beautiful souls who will shower them with affection in time, as well as sharing their quirky, beautiful natures.  Thank you for reading. Read more about Ollie on his separate listing. 07477926973/[email protected]

Alfie & Ollie are currently featured on Cat Chat's 'Twenty for 2020' campaign, which aims to find homes for cats who have been in rescue care too long. Find out more about the bromance between Alfie & Ollie here:  https://www.catchat.org/alfie-ollie
Information
When contacting us, please mention that you found us through our Cat Chat Homing Page - thank you!