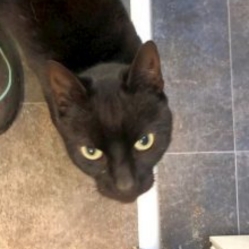 Frankie & Phoebe
UPDATE NOVEMBER: As luck would have it, the new owner of Phoebe contacted their local RSPCA Branch on the Wirral to rehome their cat as she was terribly unhappy (she was rehomed with a baby human and most adult cats don’t settle.) The owner had given Phoebe’s adoption paperwork by the original adopter, so the Branch advised them to contact us. WHAT ARE THE CHANCES? So, meet Phoebe who was immediately reunited with Frankie;​ they are so happy and so are we!
Phoebe is a lovely girl too! Based on the information we’ve received, they’ll require a pet free home and they’ve not been around children only teenagers.

Frankie originally came to us with his sibling and mother back in 2014 as the owner was being evicted; he and his sister were only three weeks old. They were adopted together but sadly Frankie has been returned and his sister rehomed privately which was very sad for us.
Frankie is such a sweetheart, super friendly and affectionate.
Based on the information we’ve recieved, he’ll require a pet free home and he’s not been around children only teenagers.
We’ve had to restart his vaccinations, he’s been health checked and has been booked in for a dental; he did have flea dermatitis for which, he has been treated.
Frankie is a big personality and will add some excitement to your home!
If you’d be interested in sharing your home with a new companion, please contact our Rehoming Co-ordinator on [email protected] or leave a message on 01625 669620
Log 1825/01/09/14
Information

Frankie
When contacting us, please mention that you found us through our Cat Chat Homing Page - thank you!