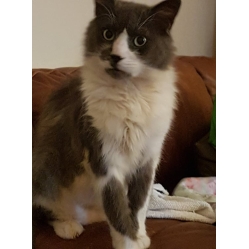 Arthur
Arthur came to us with terrible cat flu. He had runny eyes and nose, a sore throat, fleas, worms, ticks, diarrhea, a very matted coat and smelt fusty Although only young he had the appearance of an old cat. After a Convenia long-lasting antibiotic injection Broadline spot-on treatment and special dietary food,
He was a bit happier but still quite poorly. Two weeks later the vet prescribed a course of Noraclav antibiotics, he was much better but still had diarrhoea so needed to continue eating the special dietary food

Once Arthur was healthy we found him a home where he lived for about 2 years. His owner then became ill and unable to care for Arthur so Arthur is now back with us
Information
When contacting us, please mention that you found us through our Cat Chat Homing Page - thank you!