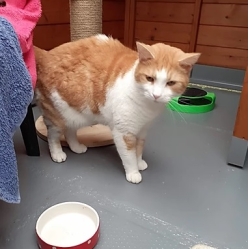 Gatty
Gatty is a real character. He's quite a large cat, but he's easily frightened and doesn't particularly like other cats. He lost his tail in a cat fight, probably running away! His natural instinct if he's frightened or unsure is to hiss or even to lash out, but that shouldn't be mistaken for aggression. He needs someone who understands cat behaviour and can give him confidence and help him relax. He's a real character, who ideally needs to be an only cat, in a quiet rural setting.
Information
When contacting us, please mention that you found us through our Cat Chat Homing Page - thank you!