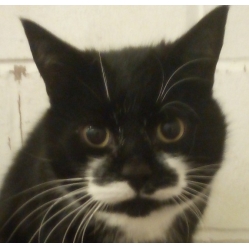 Zippy
Zippy was a stray, taken in by a kind gentleman who fed all the neighbourhood cats. Sadly the man died, and the rental comapny threw all of his cats out of the house, left to fend for themselves in awful winter weather. Zippy was the hardest one to catch, and the most nervous of the group. He hisses when he sees people, but can be stroked and handled, and he's never shown aggression even when being examined by the vet - he just seems to talk big! Zippy needs a special, understanding home, preferably in an area where it's safe for him to wander outside during the day.

When Zippy came to us, we noticed he had a large swelling to one side of his throat. The vet said said it's not an abscess, and may be a tumour, but it's in a difficult area to operate on. As Zippy is showing no signs of ill health or discomfort, we don't think it's currently appropriate to put him through investigative surgery, but this is something his new owner would need to keep an eye on in future.
Information
When contacting us, please mention that you found us through our Cat Chat Homing Page - thank you!