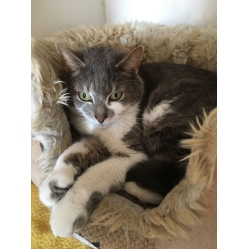 Jasper
Dear Jasper.  I will post a little about this sad, deserving boy but perhaps without holding out too much hope that we will be able to find him a suitable owner.  Jasper and his brother were born outside and were living there when I first came across them.  They were being fed by somebody.  I was asked to trap the boys and get them neutered which I did.  Unfortunately, the couple then said they were not willing to keep feeding them because they couldn't afford to.  I had no choice but to accept this, though it was very clear that money was not an issue in any way.  Jasper's dear brother is no longer alive, too sad and emotional to go into, but it involved gross negligence by vet staff.  Jasper is terrified, of everything which is the main problem.  He has been officially under the care of LPCR and where he is now for well over a year but I have been overseeing his care before this.  So many cats I have come across and fostered over many years have been scared to death initially, many never having been around humans.  However, I don't recall any ever being quite as scared as Jasper is, some long term true ferals perhaps being the exception.  He shares a pen with another cat who is very confident and very friendly and the boys get on well.  However, it seems that Jasper often loses out where wet food is concerned, though I try to work around this when possible.  There is a lot lacking in my own circumstances but I do have the option to allow many of the foster cats to have some fresh air in safety when the weather is okay.  In the past, I have observed Jasper sometimes being a little bit of a bully with one or two other cats.  However, more often he was seen as a victim and it was clear that he was considered to be different by most of the other cats.  This led me to just let Jasper and his pen mate out together which worked well for a while.  At such times, when outside Jasper would often run to me, for a stroke along his back which he would arch for me so I could stroke it.  However, more often than not now, Jasper does not leave his bed in the pen even when it is only him and his mate who would be out.  It seems he felt particularly uncomfortable on the last occasion he was out with the other cats so has decided to avoid it.  The idea of letting these deserving cats outside is mainly to allow them some freedom to run around and play, chase around after imaginery things and to have the opportunity to be a cat, this could be inside or outside of course.  Like all the other cats in the care of LPCR, and generally, they are all very precious and deserve to be happy.  Whilst those with us have facilities that are a long way from perfect, bearing in mind they were all living rough and fending for themselves in most cases, their life is not too bad though nothing like as ideal as their own homes would be of course.  So, putting ideal scenarios to one side, which would include lots of indoor and outdoor equipment, it does appear that most of the cats in our care are happy, relatively speaking.  However, I believe that Jasper is an unhappy little boy and it is hard to see.  When he is in his pen in his bed, he allows, even seems at times to enjoy, strokes on his head but that is almost always all.  Whilst I suppose his origins would class him as feral, as a result of his mum being let down by humans etc, the way his life has progressed mean that it is his fear that has been the main concern; if he had been steered more to be more sociable, I am certain that this would have had a negative reaction and he would have retreated more and more.  This sort of progress has to happen at his pace, however slow this may be.  I feel that he could be so much more relaxed, perhaps growing into something resembling happy, in the right environment and with the right person.  He will always be loved and cared for as best we can do but knowing he is not happy at all is of huge concern.  We really do love him to bits and want the best for him; if it has to be that he remains with us, we will look again at how we may be able to improve his life.  Whilst this may turn out to be impossible, it won't stop us trying.  Thank you for reading.  07477926973 / [email protected]
Information
When contacting us, please mention that you found us through our Cat Chat Homing Page - thank you!