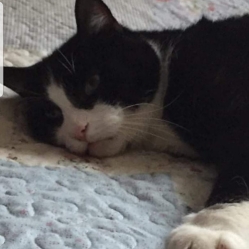 Bertie
FURTHER UPDATE It seems that 'Bertie' is called Oscar, though his name is his least concern, poor boy. Age wise, I have been told today that he is eleven. I also found out that he was being fed outside, IN A CUPBOARD of some sort that had been thrown out, for THREE YEARS. The poor soul was outside through all sorts of horrific conditions, including torrential rain, snow, thunderstorms etc etc. Oscar would be best as the only pet in a home and one where he can be allowed to get used to living in comfort and safety totally at his pace. Apparently, this very needy boy is very loving, and he likes to come to you, rather than initially anyway, being fussed and picked up. It is believed that he has been ravaged by foxes in the past, damaging his eye but it seems that this has all healed well. Like so many cats, he has had a very rough few years or longer. Let's hope that he can live the next part of his life being shown respect and surrounded by love and with everything he needs.

UPDATE Apparently, this very vulnerable, gorgeous boy is very sweet natured, gentle and loving.
These photos are of a thirteen year old male cat, name unknown so for now I have just put the name Bertie. He has been neutered and microchipped, details of course could be updated as needed. Apparently, he has not had a very good life for at least a few years, perhaps longer. I do not know much about him and even then my understanding of any available facts is hazy. It seems that he has been 'rehomed' in some fashion or other several times. It may well have been on a kind but misguided whim, who knows. Apparently, he was found on the streets last October and taken in by somebody, then again during February this year. Now, yet again, he is unwanted, mainly it seems this is because he and the dog do not get on. The fear is that this little boy will be turfed out on the streets again. My heart breaks even thinking about this, and for so many others of course, and others will feel the same. Many of us will want to help directly but just can't, including me. If anybody feels they have the right sort of stability in their life, regarding their home and circumstances etc, and feel they want to find out more about this very, very vulnerable little lad, PLEASE PLEASE get in touch or share. Like all animals, this needy little boy deserves the utmost respect and his next move should be to a place where is loved to bits, kept safe and is wanted for the rest of his life. Thank you for reding. x
If you are even vaguely interested, PLEASE get in touch: 07477926973/[email protected]
Information
When contacting us, please mention that you found us through our Cat Chat Homing Page - thank you!