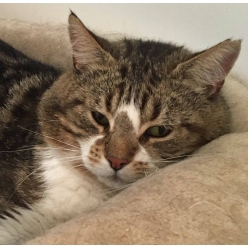 Bob
Bob has lived outside for at least two years.  For much of this time, when he appeared, he was fed by two people who lived a few houses away from each other.  Whilst this was very kind of them, it didn't help at all with regard to him having anywhere safe, warm and dry for shelter.  Anyway, when I found out about him, his details were promoted in the area in several ways with no response.  Bob is now in the care of LPCR, after being trapped and taken to the vets first for the basics.  He is a lovely lad, perhaps about four years old, to be checked again when vaccinations are started.  Bob is a friendly boy now he has settled and seems to be enjoying the relative comfort and security of his pen, along with his even bigger love which is his food.  He enjoys strokes and giving nose bumps too.  He rubs around your legs especially at food times when he will often stand on his hind legs just to remind you that he's there, ready and waiting!  He is a beautiful boy and really deserves a loving home and owner who will cater to his every need, well, apart from non stop feeding that is.  I feel in many ways that I am still getting to know Bob; he is an intriguing mixture really but does only display great qualities. Whilst he is affectionate and gentle, he also likes to chill on his own curled up in his bed, now apparently without a care in the world.  Mind you, if he thought another meal was being offered, he would bound out of his bed in a flash.  He often enjoys playing with toys when he appears so cute, almost kitten like.  He is a loveable, unassumng sort of lad and is now just waiting for somebody to be his forever friend and share a home with them.  He has a lot of love to give to a devoted owner.  Thank you for reading.  Bob and Finn are sharing their living space and get on well together so could actually be homed together.  Thank you for reading.  07477926973/[email protected]
Information
When contacting us, please mention that you found us through our Cat Chat Homing Page - thank you!