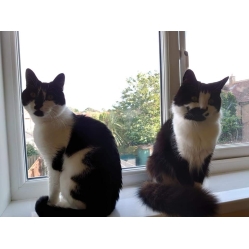 Ronnie and Reggie
Ronnie (long haired) and Reggie (short haired) are a very loving male duo. They absolutely love attention and cuddles. Ronnie can quite often be found snuggled up inside your bed, the obvious raise in the duvet where he tunnelled his way in. Reggie prefers a nice quiet bed tucked away somewhere. Reggie is quieter then Ronnie who much prefers to be in the company of humans, Ronnie will very quietly meow at you and place his paw on you to let you know that you haven't stroked him in 2 seconds. Both are neutered, microchipped and treated for fleas and worms.
Information
When contacting us, please mention that you found us through our Cat Chat Homing Page - thank you!