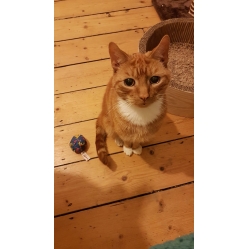 George
This very handsome senior kittizen (about 12) is George. George was rescued aged about 5 with a couple of health issues and unable to “cat” properly – he wasn’t used to strokes and fuss at all. His owner spent a lot of time and energy to bring him on and did a brilliant job but the arrival of a new baby left him very stressed and anxious so he came into foster with us.
George is an affectionate boy but on his terms. If you go to fuss him when he is not in the mood he runs off. However, when he is in the mood you need to stop what you are doing and give him your full attention, because he will let nothing get in the way of getting a good fuss, so you will just have to put down that cup of tea until George says so! He is not a lap cat but he will sit on the sofa next to you or behind you and at bedtime he often tries to sit on his foster mum’s shoulder or chest. He can be ok with some other cats, but he doesn’t like the youngsters barrelling up to him to say hi, and he can get a bit possessive of his foster mum when her cats are having a fuss, so he would be best probably as an only cat. It would also be better to control his diet too as he does have bouts of vomiting from time to time, but various tests and changes to his diet have not identified the cause.
He is very happy to see visitors and go to them for a fuss, usually because they are telling him what a handsome chap he is so he likes to let them get a closer look!
George doesn’t have brilliant eye sight so he can take a swipe at you if you make a sudden movement and startle him so he would be best suited to a quieter home with adults. He likes to take a turn in the garden on a nice day but is happy to spend most of his time indoors on a bed or sofa snoozing.