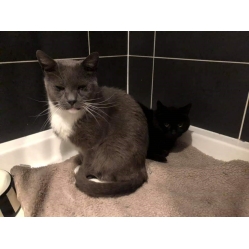 RUSS & RALPH
So the story goes that during lockdown a lady contacts Pippa's Army about these 2 stray cats that she has been feeding, one of them now has a serious eye infection and needs help and boy, she wasn't wrong.
This poor boy was oozing pus from his eyes, we had no idea if he even had eyes anymore and if he did, would he be able to see?
His friend Russ stayed by his side, guiding Ralph and without him we have now idea how poor Ralph would have survived.
We found both boys had already been neutered, so were once owned, but had lost their trust in humans and sadly Russ still has a long way to go.
Once Ralph's eye infection was cleared up we were delighted he could see but this poor lad suffered with entropian, a very sore eye condition, and our vet soon fixed that along with removing most of his rotten teeth.  This poor boy will now be pain free for the first time in a very long while.
On the road to recovery, Ralph loves strokes and will stand on his back feet to head butt you in the face.  Once he trusts you he is such a sweet boy, loves his food and especially loves Dreamies.
Russ loves a comfy bed, he too loves Dreamies and he loves his buddy Ralph.  He gets a stroke and I get a hiss, but it's a work in progress and he deserves a second chance with his buddy Ralph.  Could you be their second chance?
To enquire about Russ and Ralph please contact Michelle on 07947 716603.
All cats are neutered and microchipped.
Homecheck (virtual) and donation applies to Pippa's Army! - Lost & Found Pets Havering & Thurrock
Information
When contacting us, please mention that you found us through our Cat Chat Homing Page - thank you!