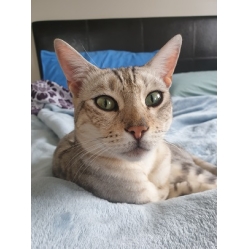 He is neutered, vaccinated and microchipped.

Max has no medical issues.

Max's owner says....
Please find below a little description of Max
He's a 2 year old Bengal .  He was neutered a little late at about 7 months.
We live in flat on a high street, so he has no outside access.  He absolutely loves his food, in fact, when we eat, we have to ensure he doesn't come up on the table, or he tries to swipe the food from our plates!  He would eat anything if he could, so never leave food out/unattended!.  However as Bengals tend to have sensitive stomachs, he is fed only on James Wellbeloved grain free wet pouches and Royal Canin Bengal dry bits.  When we first had him, we fed him Purrform raw complete cat food.
He's quite a big cat, approx 6.4kg, and charges about the place, never seeming to hurt himself!  He is pretty clumsy though, and not the best climber/jumper...which is quite unusual for a Bengal!  He loves playing any kind of game on a string with you.  He also loves to wrestle his toys, but when he plays alone, he tends to almost go a bit feral with his toys, and tries to chew them up, like a dog would, so we sometimes buy him small dog toys.  He knows his name, and comes to it when called.
When he's not charging around, he absolutely loves cuddles, laps and strokes, and acts like a big baby.  At night, he likes to be given his Royal Canin biscuits with a stroke, and rolls around the floor.
He's always gone to the toilet in his litter tray, and has never gone elsewhere.  His poo's are solid and formed.  We use the white granule litter.
Unfortunately the reason for rehoming is about 1% of the time, he shows aggression.  He never hisses, but if you tell him off he sometimes launches himself at you to bite.  It's not continuous, and 1 min later, he's back to normal.  I think it comes from a bit of boredom  and occasionally he looks frightened, but we've not given him reason to be frightened (when we tell him off, I'm talking about removing him from where he's not supposed to be and putting him elsewhere!).
He's an only pet, but when he visits the cattery, he loves seeing the other cats.  The lady who owns the cattery wanted to take him, and she trialed him in her house, and he got on with all her cats.  Unfortunately her place is on a main road, and he is not streetwise at all and she was worried something would happen to him.  I think if his new owners were in a quiet area, if they were happy to let him out, he'd probably love that.  We did try lead walking him, but we never found the time to do it consistently, as we had to take him somewhere quiet away from dogs/high street etc.
Location: Epping, Essex.

Adoption Fee: £150.00 to be donated to charity.
Information
When contacting us, please mention that you found us through our Cat Chat Homing Page - thank you!