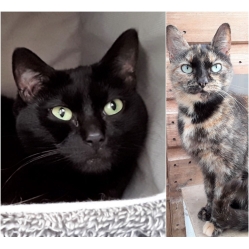 Pepper and Pixie
Pixie, the tortoisehell girl, and her friend/sister Pepper were dumped together at the end of a farm road. The van they were dumped from was on hire so the chances are someone was moving or a relative had died or been taken into care and the cats were considered disposable. They'd certainly been living in a house as they'd been well fed. Of course, such an experience was frightening and confusing for the poor girls but, despite that betrayal, they really are such good natured wee souls. Pixie is the more confident of the two but Pepper, who is less inclined to actually come forward for petting, is growing more confident every day. Pixie's a wee thing, very dainty, and really does enjoy being fussed by her foster mum, the latter even being treated to some nice wholesome leg rubs. Pepper is bigger than Pixie but, as we all know, being bigger doesn't mean being braver! Both girls are wee purring machines and now that they're fully vaccinated, spayed and microchipped it's time for them to find a wonderful home together, this time a home that will be for keeps. Pixie does need a little dental work done, which has already been arranged and will be carried out before they go on to their new home. As we don't know how used they are to children or dogs it's not possible for us to be sure how well they'd all get on. What we can be sure of is that both Pixie and Pepper are good natured, playful, girls who show no signs of any aggression whatsoever. We suspect they may have been indoor-only cats simply because Pepper was a bit on the chubby side, but we can't know for sure - the people who dumped them didn't feel inclined to hang around giving any information! It could well be that the girls would just love a garden to explore once they've been very well settled.
Information
When contacting us, please mention that you found us through our Cat Chat Homing Page - thank you!