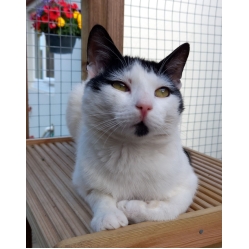 Smudge
This young man appeared in a garden looking very unkempt and, finding kind people lived in the house, he went back every day for a meal. He was unneutered so it could well be he had travelled miles from whatever home he had lived in previously, as unneutered tom cats do go in search of females, and become hopelessly lost. It could also be he had lived much more locally, but he had clearly been on the streets for a while and no-one was looking for him so there's also a very good chance he had just been abandoned. It happens a lot, even to sweet natured boys like Smudge. So, in he came to be looked after in foster care and to get the vet treatment he needed and he's just loving it! His 'hotel' accommodation is very cosy, food is delivered by the human staff, his bathroom is nice and clean, he has toys to play with and things to climb and scratch on and life is good. This boy plays like a kitten and may not even be the two years old we estimate. He sometimes plays a bit rough and gives wee 'love' bites, like kittens do, but it is play with no harm whatsoever being intended or done. For this reason, it's probably best if Smudge doesn't go to a home with very young children as his rough play might upset them. Smudge's foster mum named him, and a quick look at his handsome chin will tell you why she felt the name suited the wee guy! Smudge's next door neighbours at his 'hotel' accommodation is a mum and her two kittens and, although they aren't together, they can see each other through clear perspex and there's no animosity whatsoever from either side - a good sign that Smudge may well be fine in a home with another cat if the resident cat is the type to be okay with him! He's neutered now, of course, and has been fully vaccinated, microchipped and health checked. His coat is looking great now too, so Smudge thinks it's about time he had a Forever home. He would want to have access to the outdoors once well settled so a home away from busy roads, with good people, would be just wonderful.
Information
When contacting us, please mention that you found us through our Cat Chat Homing Page - thank you!