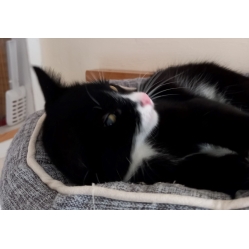 Ivy
*UPDATE! Ivy will join her new family at the end of November! As always, we'll keep her profile on here until we know she's well settled.


Little Ivy came into our care only recently as and is due to be spayed and microchipped on October 26th, at which point she will also start her vaccinations. Ivy was living with a toddler who tended to pull at her, as toddlers will, so might be a bit wary of very small humans. However, she proven herself to be an absolute sweetie and we can't see any problem with her being homed with older children. She's only about eight months old, so still has so much kitten silliness and fun to enjoy. Of course, those of you who know cats well will be aware that many are still fun-filled 'kittens' when they're eight or eighteen years old! Ivy was kept as an indoor-only cat but that was due to circumstances rather than choice so we think she would really quite enjoy the opportunity to get outside to explore once fully settled, so a home with a garden or other safe environment would be just wonderful for her. Her foster mum had a bit of trouble getting Ivy to stay still long enough to get a good photo, or one where she defied her own personality by looking grumpy, but I liked the one where she was caught rolling on her back as it shows how relaxed she is in her foster situation. Her vaccinations only starting on October 26th means Ivy won't be available for adoption until the vaccinations are complete and that will be at the end of November. We don't home within two weeks of Christmas, of course, to avoid the 'animals for Christmas' scenario!
Information
When contacting us, please mention that you found us through our Cat Chat Homing Page - thank you!