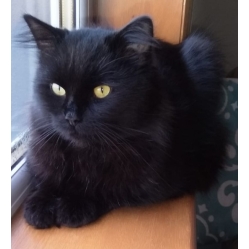 Midnight
UPDATE Midnight now has a home lined up and will be joining his new family this week!

This rather stunning young man was abandoned, unneutered, and left to fend for himself on the streets. Fortunately for him, he was lucky enough to find someone who offered him food and eventually shelter when the weather became bitterly cold and he was clearly in trouble. Abandoned animals aren’t always that lucky, unfortunately. Being so young, Midnight is now enjoying the kittenhood he was probably denied in his previous home and, as you can see from the photograph, he’s thoroughly enjoying some home comforts!

We were asked to help and have had Midnight neutered, fully vaccinated and microchipped so he’s now ready to pack his hankie and head off to a new Forever home. The boy was used to being outdoors and has lots of energy now his tummy is full and he’s in such good health, so a home where he could have access to an outdoor space away from busy roads once he’s well settled is definitely a must. The people who took pity on him have cats of their own and Midnight seems to be quite comfortable with that situation, so it could be that he’d be okay in a home where there’s another, accepting, cat. He has a sweet nature, so should be fine with children too.
Information
When contacting us, please mention that you found us through our Cat Chat Homing Page - thank you!