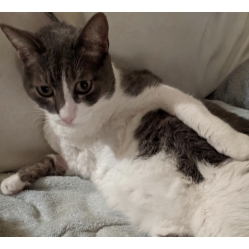 Derek
Derek - A very placid cat who is quite timid
with strangers initially, but as soon as he knows he’s not under any threat, should soon be relaxed
enough to ask to sit on your lap (he extends a paw towards your knee and awaits your signal - a pat
on the knee - to allow him up).
He is quite happy being manhandled and enjoys being stroked, rewarding you with loud appreciative
purrs.
He has had some limited experience with children and babies and he has never demonstrated any
aggressive behaviour and can tolerate quite ‘robust’ play. He’ll occasionally give his younger
housemate - The Duke – a left hook if he’s had enough play, but claws are never revealed.
Derek is used to the outdoors and he has a few friends in the neighbourhood who he seems to rub
along without any issue. In fact, he’s been more than happy over the years inviting the
neighbourhood strays to share his bowl whilst the Human’s back is turned.
His last check up at the Vet revealed his teeth needed some attention. He was given a full cleaning
procedure and during this he had a few of his back teeth removed. This has not caused him any
trouble and he returned to eating his preferred kibble within a few days.
Derek has been rather spoiled and is slightly overweight. He is currently on a diet. He is looking for a home with his best friend Duke.
Information
When contacting us, please mention that you found us through our Cat Chat Homing Page - thank you!