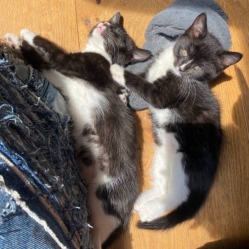 Princess & Cowboy
Princess (F) and Cowboy (M) were a part of 4 kittens that were surrendered to a vet as orphans when they were just 3 weeks old and very sick. They've amazed their foster parents with their kind, loving and fun nature despite what they went through early on!

Princess is very small in size, with a white long mark on her nose and a lovely tuxedo coat. She has a huge personality and even longer whiskers, and shows you she's happy to see you by jumping in the air in tiny hops. She loves cuddles and will begin purring the moment you pet her. Cowboy is a sweet boy, very loyal, playful and cuddly. He looks very similar to Princess but he has a larger white tip on his nose. He was very protective of his siblings when he first came to us but soon trusted us fully and became the softest boy. When he wants your attention he'll let out a few tiny meows and tap your foot and loves to fall asleep on your arms. They're both very curious and want to be included in all you do, whether that's cooking or typing on a laptop, they love to sit on your lap or perch on your shoulders. If you pick them up they will flop and start purring, which is quite endearing!

They're bonded with each other and love to spend time playing and cuddling with each other and their foster parents so those two will have to be adopted together. So far they've done really well with kittens outside of their own litter and seem to be curious about other older cats.

They haven't interacted with small kids and due to being separated from their mum at such a premature stage they suckle or nibble on a finger for comfort every now and again so we advise some caution. They're litter trained and get their nails clipped every week, overall they're very familiar with human touch and would make beautiful life-long companions. They're set to get their vaccinations once they all hit 1KG mid June.
Information
When contacting us, please mention that you found us through our Cat Chat Homing Page - thank you!