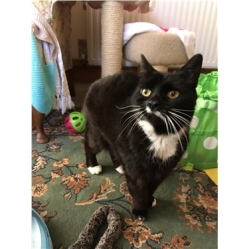 Paul
Paul – although we prefer to know him as Columbo – is a rather lovely 5  year old tomcat.
You will need to be of a certain age to understand why Columbo, and if you do understand you’ll realise that he is ‘one-eyed’.
He lost an eye, and had a broken jaw which he has recovered from remarkably well – although his enthusiastic dashes around the house can sometimes be misjudged – he’s missed the bottom step a couple of times, and can be a little bit of a ‘bull – in – a – china – shop’ – but he’s so loveable and looks a bit surprised when he discovers he can’t quite manage what he used to.
He has remarkably soft fur and adores company – in fact he potters around the house after his foster parents like a little puppy. He’s taken to joining in the ‘isolation keep fit sessions’ (not quite sure they are working on him ), and he enjoys trying to help our daughter with her dancing practice. He’s also a fab office companion, sitting nearby listening in to the phone calls, and livening things up by making guest appearances !
Someone out there is going to be very lucky – he is just the most adorable puss cat. Are you that lucky person …..
Information
When contacting us, please mention that you found us through our Cat Chat Homing Page - thank you!