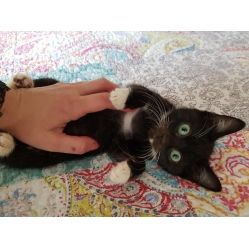 Cwtch - special needs cat
Cwtch's mother came to Catcuddles heavily pregnant, even though she was little more than her kitten herself. Along with her sister, who was also a youngster in the advanced stages of pregnancy, she had been living as a stray for months, fed by local people.

Although Cwtch's mother was rescued in time to give birth in the safety of foster care, as often the case when female cats get pregnant too early in life, her kittens were very delicate and slow to develop. The entire family suffered from frequent digestive upsets, and were a constant source of worry to volunteers.

It wasn't immediately clear that Cwtch in particular had been born a little different. From all appearances, he was an ordinary kitten; loving, playful, and outgoing.

Eventually, however, as Cwtch began using the litter tray independently, it became apparent that he was having difficulty toileting without assistance. After multiple veterinary examinations, our team finally began to understand the problem; feces were getting stuck at the final part of their journey through Cwtch's digestive tract, and he could not push them out unaided. This is most likely due to a rare deformity that developed in-utero.

In order to pass stool, Cwtch needs to be manually "expressed", having his lower abdomen massaged to help ease out the contents of his colon. We consulted several specialists, but our hopes that surgery would correct this issue were quickly dashed; it was deemed inoperable. Cwtch will therefore need to be manually expressed, 1-3 times a day, for the rest of his life.

We are devastated for Cwtch because as mentioned, he is otherwise an ordinary kitten. In fact, he is even more loving, cuddly, and friendly than most. He has no idea that he isn't normal. He has no idea that many organisations would consider him unadoptable, and would potentially euthanise him. It is a prospect that it pains us to even consider.

Cwtch will often sit in the litter box when he is ready to "go", and is generally quite cooperative about being expressed, although it may become a little more difficult as he gets older, or he may simply become accustomed to it and accept it as part of his daily routine. Nonetheless, it is a considerable commitment for a prospective adopter to take on, as it would require someone who is often home, with plenty of time to spare, and who isn't squeamish.

The condition has improved since the initial diagnosis. Cwtch has been able to pass stool further down his digestive tract, and we're hopeful that his body is learning to adapt in some way, and that perhaps he one day will be able to toilet unaided. However, this is a rare and quite specific congenital abnormality, so there are no guarantees.

We would be there to help support and guide Cwtch's adopters, whatever the future holds. We know it is not a small ask, however, for someone to fit their life around managing this unusual condition. In our opinion though, Cwtch is worth it, and this lovely, purry, brave boy deserves to have a life. We just need to find an adopter who agrees with us.

Cwtch is being fostered at our South London hub in Abbey Wood, SE2.

Before submitting an adoption enquiry it is important to ensure that you have read our adoption info page: Adopting a cat from Catcuddles.

Our priority is to match felines with homes that suit their needs, character and long term requirements. Please be aware that when particular cats receive an unusually high volume of enquiries, our dedicated adoptions volunteers may only be able to pursue the most promising. We appreciate your understanding.
Information
When contacting us, please mention that you found us through our Cat Chat Homing Page - thank you!