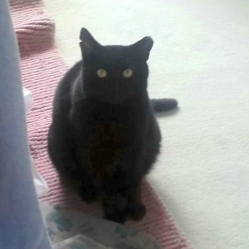 Shadow (ON HOLD)
This black beauty we have named Shadow because he’s the elusive sort and loves to come out at night! Saying that, the last few weeks he has shown his face in the daytime and spent time with his fosterer. The photos do not do him justice, he’s got a gorgeous thick shiny black coat of which any cat would be envious! He was picked up a stray by an RSPCA Inspector, reportedly with a lame leg but, upon full examination, he was fine. He has been neutered, chipped and vaccinated. He was going to be released back to his territory but the area was not suitable.

So, he came to live with us. He loves his home comforts; he’s litter trained and loves to play and entertain himself. But he is very nervous still, however he has never been aggressive. He needs an understanding owner and a home without children.

He just needs someone who can let him do his thing and gain his trust over time.

After a while he has started to rub against his foster Mum’s legs and rolls on his back, he likes her to play with him and his toys. He’s getting more confident as time goes on.
Information
When contacting us, please mention that you found us through our Cat Chat Homing Page - thank you!