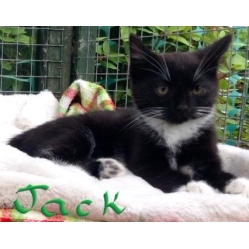 Jack and his sister Angel were born on a landfill site. How their mother, Jess, actually managed to keep these two babies safe from the heavy machinery that thundered past their hiding place for several hours a day and the hundreds of seagulls and rats that scavenged there as soon as the place closed says so much for her courage and determination. The driver of one of the massive trucks used to scoop up the mountains of non-recyclable waste destined to go into the landfill itself stopped to tell me about this little family or I may never have known that the two kittens were hidden away amongst it all. It took weeks to finally catch all the cats on the site - 11 adults and two kittens - with most being caught at night after the site closed because that particular area is dangerous so I wasn't allowed in when the site was open. It's only thanks to a local woman, a councillor who loves cats, volunteering to come with me at night that most were caught when they were as I could only be allowed on site after hours with a companion for health and safety reasons. She is called Jacqui, and Jack is named after her. Jack's sister Angel was actually caught almost two weeks before he and his mother were. Jess could have been caught much earlier, but we knew there was another kitten around somewhere and couldn't leave him behind without the protection of his mother. Angel has had a home lined up with a lovely family who have adopted from us before right from when she came into our care, but Jack has still to find his Forever home. Those two extra weeks living in such a dangerous and threatening environment means Jack was more frightened by the sudden changes and by human handling than Angel had been. She was named Angel for a reason because almost from the word go she took to it all like she'd been born in someone's living room! Jack's a shy wee boy so doesn't approach his foster mum Linda for cuddles, but he does happily scramble all over her when she lies down and just lets them have great fun playing around her! Linda's actually fashioned a tickle stick made out of a puffed up rubber glove on a stick to let Jack get used to a hand reaching out to stroke him - it's a strange mixture of madness and genius really! Jack will get there just fine, but his new family will have to be kind and patient and allow Jack to dictate the pace. We think he would be best placed in a quiet home where there is another welcoming cat or kitten for him to relate to, one who will continue to reassure him that humans are no threat to him and that life in a household is a wonderful thing. He'll never claw his way up a mountain of garbage destined to be scooped up and thrown into a landfill, trying to find anything remotely edible, as Jacqui and I witnessed his poor mother do. Jack has had his first set of vaccinations and will get the second set on July 7th, at which point he'll also be microchipped. A home with access to a garden or safe area to explore would be wonderful once this little man is well settled, neutered and old enough to go outdoors.
N.B. At the moment the U.K. is still in lockdown due to the coronavirus pandemic, but it is still possible to carry on the work of the charity without contravening safety guidelines. Potential new homes can still be visited, meeting either in the garden or street. Although some restrictions have now been lifted in England they don't yet apply in the rest of the UK and so people still can't visit any of the cats in their foster homes. All we can do for now is provide photographs and absolutely all information about each individual cat or kitten and then deliver the cat to his or her new family.