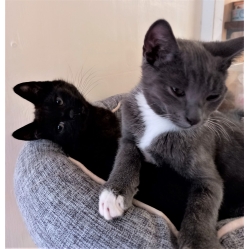 Ruby and Cody
Ruby, who's all black, and her brother Cody, grey and white, came into our care when they were just tiny babies along with their young mum April, the little family having been found in a garden. Of course, being so little when found, the babies are very happy to be handled by humans with April herself having clearly once been living in a domestic situation. Not having had the kind of people in her life who would ensure it couldn't happen, careless April managed to get pregnant and paid the price for her silliness by being abandoned to get on with it. When her kittens got to that adorable toddling stage where their wee legs are struggling to keep up with what's expected of them, their foster mum noticed that Ruby's back legs seemed to splay out more than normally expected. This small fact didn't stop Ruby from throwing herself into every daft activity instigated by her brother Cody, nor did it stop her inventing a few of her own. A visit to the vet surgery confirmed that Ruby's problem was due to something commonly known as 'swimmer syndrome', so-called because the back legs look like they're the back half of the crawl stroke. The great news is this syndrome is easily dealt with when caught early: it required bandaging the legs together in a particular way and a dedicated human fosterer and vet to keep a check and change the bandages when necessary for two or three weeks, thus allowing the wee legs to align properly and grow nice and strong. And that's exactly why Ruby's legs are now perfectly normal and will stay that way! Ruby and Cody are now fully vaccinated and microchipped but aren't old enough or big enough to be spayed and neutered yet, so that is something a new family would have to have done when the time is right. We're pretty sure the babies would be just fine with older children (5+) and a friendly, gentle, dog shouldn't be a problem either. A home together is an absolute must as they just love each other too much to be separated. It would also be great if they could have access to the outdoors once neutered/spayed and very well settled, away from busy roads. They're lovely wee mum April, who isn't much more than a kitten herself, is listed separately.
Information
When contacting us, please mention that you found us through our Cat Chat Homing Page - thank you!