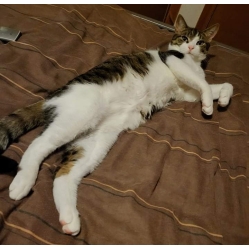 Jacob
Jacob was living with an elderly couple with health issues who asked us to find a home for him with younger people. I think it's safe to say that living with older people was definitely not the best match for Jacob as he's now found his inner kitten in foster care. His foster mum describes him living life at 100 miles a minute, providing more reasons to laugh than watching a political broadcast. Jacob's hobbies include trying to break his own Zoomies World Speed Record as he rattles around the house racing an invisible opponent up and down the stairs, trying to get characters on tv to interact with him (but they're just hopeless), rattling the kitchen cupboards (just because it's fun), and demanding his foster mum and her brother drop everything and get the fishing rod and laser toys out for a great game, and generally being an absolute clown who makes the Energiser Bunny look like he's been sedated. He also likes to try and follow his foster mum into the bath but that's really not a good idea. Of course even Usain Bolt has to rest occasionally so when he feels the need Jacob relaxes by sitting on the upstairs window sill to watch what's going on outside (probably making plans...) or will stretch himself out on the sofa or the bed for a well-earned rest. It was in one of those rare moments that his photo was taken. One thing Jacob doesn't like is the vaccuum cleaner, big scary beast that it is, so he takes himself off to hide under the bed until it's all over. Having been an indoor-only cat and not having had the chance to interact with other cats, Jacob has decided that he doesn't really like other cats that much either. They're better than the vaccuum cleaner right enough, but he thinks nothing of telling off his foster mum's own cats if they have the audacity to sit on the outside window sill. He recently decided to declare the cat pictured on the outside of a big bag of dried food an intruder and set about seeing him off. However, after a few minutes of side-on king fu threats of attack he walked off, having realised his mistake but working really hard to look like he knew all along and trying not to look embarrassed. Jacob's ideal home would be with a family with older children who would love to play with him as he loves company and interaction with people. A home with a garden where he could get outdoors once very well settled and could let some of that amazing energy loose would be just wonderful. He's neutered, fully vaccinated and microchipped so all ready to pack his bags once we find his perfect home. Please be aware that we stop homing two weeks before Christmas to avoid the 'animals for Christmas' scenario but that I'm happy to pay visits to potential new homes between then and when we start to home again around January 8th.
Information
When contacting us, please mention that you found us through our Cat Chat Homing Page - thank you!