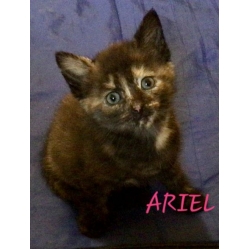 Ariel
Baby Ariel and her three siblings Seth, Shai and Orin, were born in our care on April 3rd, their mother having been abandoned to the streets some time before and now about to give birth. In fact, her babies were born exactly one week after she was picked up! Although the kittens are being placed on the site separately, the fosterer is very keen for them to be homed in pairs. They all get on so well together that there would be no real preference on how the pairs should be formed. I asked their foster mum to tell me about each wee personality but it seems they have one major thing in common - they're all delightfully bonkers! Unless they're having a well-earned post-bonkers snooze all four come running to her as soon as she appears, hopefully she might be about to brush the solid floor because these babies like to HELP. Apparently, 'helping' involves taking turns at sitting inside the dustpan and being wheeled around as she tries, and fails, to distract them by throwing a ball for them to chase or by some other cunning subterfuge, such as encouraging a race to the top of their climbing frame because, apparently, that’s just the best fun ever, well it is if you don’t count the dustpan dodgems. None of this works, of course because kittens aren’t daft, so she has to either accept that this quick job is going to take all afternoon or creep back in when the wee darlings have collapsed in an exhausted heap. All being used to human company since birth the kittens are very confident and playful. We don’t home kittens under 5 – 6 months old with children under the age of five as very young kittens, like very young human babies, have soft bones which give them little protection from internal damage and a well-meant hug from a young child can cause serious injuries. In common with all of our rescue cats and kittens, these babies will be fully vaccinated and microchipped before being homed. They’ve already had their first vaccines and are due to complete these on or just after 27th June, at which point they will be 12 weeks old and will have reached that happy/sad time when they can leave their mother. As mentioned before, we would like the kittens to be homed in pairs. Homes with access to a safe outdoor area, away from busy roads, would be wonderful for when that time comes and they've been well settled over a lengthy period, and have been neutered or spayed. They won’t have reached the required minimum weight of 2kg for us to have that done prior to their being homed if homed at 12 weeks, in which case we provide a form to be completed by the vet carrying out the operation when the time comes and then returned to us as proof of neutering/spaying.
Information
When contacting us, please mention that you found us through our Cat Chat Homing Page - thank you!