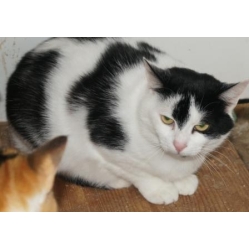 Billy ( to home with Lizzie)
I had a call back in November 2017 about a cat living in the sparse bushes next to a Travelodge in Kilmarnock. The cat was described at that point as a kitten but an older kitten rather than a tiny one. The weather was absolutely freezing and wet and the roads surrounding this particular place extremely busy, so there was no doubt this cat badly needed help. The person who called had been travelling to Kilmarnock daily to put food out for the cat and had asked if anyone working around the area was feeding him, but no-one was. He took very little time to trap, thankfully, and I brought him back to our cat shelters. Although old enough, he wasn’t neutered and this may well be the reason he found himself dumped in that inhospitable place. I do believe Billy, as he was named by the woman feeding him, had been a domestic cat because, although terrified, he would let me put my hand right up to his face and touch him whenever he was resting in bed. However, whatever experiences Billy has had with people in the past has left him so frightened that it might be best if he were to find a home as an outdoor cat. He and Lizzie, whose circumstances would appear to be much the same as his own, have formed a bond and they often lie close together. Cats homed as outdoor cats do, however, need to be very well settled for several weeks before being allowed to roam free. To simply take them somewhere where they can easily get out, or to take them and just put them out, is to invite disaster because the poor cats will have no idea what’s going on and will run away. Of course we want them to be treated with the same care and attention as for cats placed into houses, and those homes are extremely hard to find. Smallholdings etc are ideal so long as the people are sensible, sensitive and careful. Neither Billy nor Lizzie are at all aggressive – they are timid cats, and need people who accept and understand why that is so. Billy is now neutered, vaccinated and microchipped and he patiently awaits your call. He always looks so grumpy in his photographs, but he’s a quiet, almost sad, little soul.
N.B. At the moment the U.K. is still in lockdown due to the coronavirus pandemic, but it is still possible to carry on the work of the charity without contravening safety guidelines. Potential new homes can still be visited, meeting either in the garden or street. Although some restrictions have now been lifted in England they don't yet apply in the rest of the UK and so people still can't visit any of the cats in their foster homes. All we can do for now is provide photographs and absolutely all information about each individual cat or kitten and then deliver the cat to his or her new family.
Information
When contacting us, please mention that you found us through our Cat Chat Homing Page - thank you!