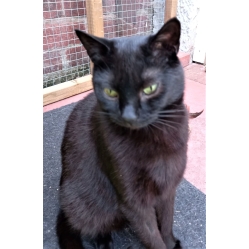 April
April was living in a garden with her two tiny babies when we were asked if we could help. I'd taken a trap with me in case she was too shy to be lifted into a carrier, but it wasn't needed as April walked into the kitchen at the house where a family had taken pity on her and I was able to go in and pick her up. Although she was still a bit shy when she and her babies were first taken to their foster home it soon became clear that this young mum had been used to living with people, but like so many in her position she had been discarded by her humans when she wasn't a cute kitten any more, or when the time came for her to be spayed and that would have cost money, or she became pregnant and was put out to get on with it. Whatever the reason, she was one of the lucky ones who found herself in a garden where she wasn't chased away by the householders and they sought help for the poor wee family. April has been a wonderful mum to her kittens, Cody and Ruby, who are also listed on this site. She such a sweet girl and plays with her kittens like she's a baby herself. She's young, so we've estimated her age at 2 but she could well be younger than that. Cats can be pregnant as early as five or six months old after all! There are no children at her foster home but we suspect she would be just fine with children who treated her well (we just don't know what went before!) and, although they've never been up close, her fosterer does have a dog who April can see wandering around the garden and she doesn't seemed worried about him at all.  April's now had her spaying op, been fully vaccinated and microchipped and is just waiting for the right person or family to come along and offer her the kind of home she's always deserved, a home where she'll be loved and cared for with no thought of her ever being abandoned again. She would definitely like to get outdoors once she's well settled so a home with a garden well away from busy roads would be just perfect.
Information
When contacting us, please mention that you found us through our Cat Chat Homing Page - thank you!