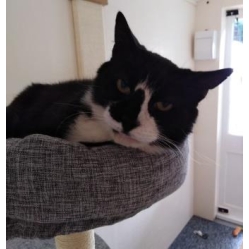 Louis
Louis came into our care at the beginning of July in quite a state. He did have an owner but had been ejected to the streets, like many of his predecessors, some time before. Flea infestation over a long period had resulted in him scratching himself sore, but that misery was the least of Louis' problems. It became clear that first night that Louis couldn't eat well and needed coaxed by his foster mum to eat only the tiniest amount at a time. The vet was shocked when she examined his mouth, declaring it "horrific", and warned us that there could be something nasty going on alongside the rotten teeth and severe infection. She suspected the possibility of a tumour. However, once the nine rotten teeth were removed and Louis had been given his first slow-release injection of antibiotic everything looked much more hopeful because the infection was already beginning to clear up! Another long-lasting antibiotic injection followed and by the time that wore off two weeks later Louis was a very happy and very healthy boy indeed.

Despite the rejection and neglect, Louis has shown himself to be not only a trusting boy, but an extremely affectionate one. He's just loving his heated and very comfy accommodation, but more than anything he's loving the attention of his foster mum Carol Ann. He puts out a gentle paw to ask her to stay when she gets up to leave him and has even been known to pretend to be asleep, complete with snores, when she tries to lift him from her knee. He opens his eyes to see if she's paying attention, so gives himself away every time! He's just adorable. So, that's Louis's vaccination course all finished, he's had the all clear from the vet, he's been chipped and is now ready to find his Forever home, this time with people who will return the affection and love he himself dishes out so willingly. He's a gentle soul, so a home with a garden or other outdoor space away from busy traffic would be wonderful for this darling wee boy.
Information
When contacting us, please mention that you found us through our Cat Chat Homing Page - thank you!