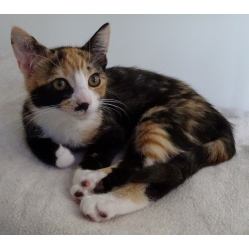 Lucy
Lucy and her sisters Freya, Alice and Marigold were born on an industrial estate about four months ago. Fortunately, their mother had been spotted with them in the nearby woods by someone who doesn't work on the estate and called to find out if we could help them. I was able to set up a feeding station and wildlife camera to try and determine when and where the cat and kittens were turning up and it soon became apparent that there were at least four adult cats and another two kittens, from a different litter, coming to eat the food. It took a while to catch all of those kittens and the work is still ongoing even now, three months later, as the adult cats have proven to be very elusive - I believe the Politically Correct terminology is "challenging" as opposed to "bleeding awkward", but we're getting there! The kittens would only be about two months old when I caught them and although shy, having never been handled, it soon became clear that they are all such good natured little souls. Lucy was the first to show her trust, the others taking their lead from her. She's a beautiful wee girl, both inside and out, who is quick to rattle out a purry song to display her pleasure when being fussed. Of course, rehoming can be a stressful time for cats and kittens who have no idea what's going on so a period of adjustment as they get used to new surroundings, people, scents etc, as well as the loss of their family, is to be expected so anyone wishing to adopt one should be prepared for some initial shyness. Lucy and the other kittens will be having their second set of vaccinations this week (i.e. mid-October) at which point they will also be microchipped. They're too small to be spayed as yet though so we would ask that anyone adopting one or more of them guarantees that they will be spayed as soon as they are old  enough and heavy enough. The minimum weight for the ops is 2kg as anaesthesia is much more risky in small kittens. A home with children aged 5+ would be fine for Lucy and I suspect she would be fine with a quiet and gentle dog once she got over the shock of a much bigger beasty looming over her.
N.B. At the moment the U.K. is still in lockdown due to the coronavirus pandemic, but it is still possible to carry on the work of the charity without contravening safety guidelines. Potential new homes can still be visited, meeting either in the garden or street. Although some restrictions have now been lifted in England they don't yet apply in the rest of the UK and so people still can't visit any of the cats in their foster homes. All we can do for now is provide photographs and absolutely all information about each individual cat or kitten and then deliver the cat to his or her new family.
Information
When contacting us, please mention that you found us through our Cat Chat Homing Page - thank you!