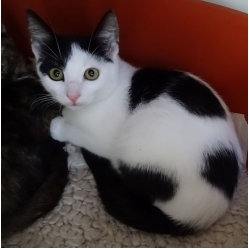 Gabriel and his brother Edwin were living on the same industrial estate as Lucy, Freya, Alice and Marigold and are the sons of Rosie, who is listed separately. Although they would be around 10 weeks old when caught Gabriel very quickly became such a friendly wee boy although his brother Edwin decided to make me work a bit harder to gain his confidence. There really isn't much in terms of age between the two litters so I guess the maternity ward, wherever that may have been, had a pretty busy couple of days so I hope the daddies were hanging around doing their bit and not off galavanting in search of ....oh, let's not go there. We all know fine what the daddies will have been up to. The boys are a bit heavier than the girls so can have their 'big boy ops' in a couple of weeks time. For that reason we'll not make them available for rehoming until after that's done, which should be at the end of October. None of that tells you anything specific about Gabriel, other than he's a wee angel over being handled and leave it to your imagination to decide how angelic he is when it comes to making mischief with his brother and pals. Given there were only the two little ones in that litter it would be just lovely if Gabriel and Edwin could stay together. By the end of October the boys will have had all their vaccinations, be microchipped and neutered and ready to go off on a new life adventure. A home with older children rather than the human equivalent of crazy kittens (i.e, toddlers) would be best and a garden to play in when they're very well settled would be just the thing for them to explore and use up all that envious energy.
N.B. At the moment the U.K. is still in lockdown due to the coronavirus pandemic, but it is still possible to carry on the work of the charity without contravening safety guidelines. Potential new homes can still be visited, meeting either in the garden or street. Although some restrictions have now been lifted in England they don't yet apply in the rest of the UK and so people still can't visit any of the cats in their foster homes. All we can do for now is provide photographs and absolutely all information about each individual cat or kitten and then deliver the cat to his or her new family.
Information
When contacting us, please mention that you found us through our Cat Chat Homing Page - thank you!