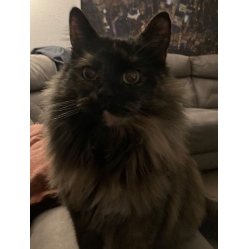 Meghan
*UPDATE: Meghan is going off to her new home on Thursday April 8th! It'll be a bit of a trial to start with as there's a 'big brother' there already and we're hoping they will not only get used to each other but actually enjoy being together.*


On November 9th 2020 a tiny kitten, about 2 weeks old, came into our care to be handreared. I named that baby Wilbur. He had been dropped from his mother's mouth as she attempted to climb a fence and been taken into a nearby vet surgery. That baby thrived and has now been homed but the very long search for his siblings proved fruitless and it eventually became clear that they hadn't survived the very wet and freezing weather. The cat believed to be his mother was being fed regularly by a kind couple and after several weeks, including camera work, when it was finally accepted that there definitely weren’t any kittens following her, I was able with the help and cooperation of her human friends to get her into a carrier and off to the vet for her spaying op. etc. It was then that something else became clear as this girl definitely couldn’t be Wilbur’s mother after all as she had already been spayed, and the operation hadn’t been recent.
There is another element to this story, though, and it’s one which I can’t really go into detail on here. Another cat, a domestic living in a home not too far away, and no longer wanted by her family, may well be Wilbur’s mother. In fact, it’s almost a certainty although, by the time I picked her up from her home to take her into our care, all evidence that she had been feeding kittens some weeks previously was all gone. When I took her to the vet to be checked over and spayed the vet noticed that one of her back legs was shorter than the other and x-rays showed us why. She had sustained a fractured pelvis and broken leg at some point, but there had been no medical help and her broken leg had eventually mended by itself, leaving that leg shorter than the other. She must have suffered so much and added to her terrible injuries was being left to get pregnant and then giving birth outdoors, struggling in vain to keep her babies alive. Wilbur is only here because she dropped him when climbing that fence. Despite it all, she has such a sweet and gentle nature and doesn’t think all people are untrustworthy. I guess she had just accepted that the life she’d been leading was somehow ‘normal’ and expected no more.
I named that brave wee girl Meghan and having been in the gentle hands of her foster mum and dad since December 30th, and feeling so well and happy, it’s time for Meghan to find her Forever home.. All that other stuff is behind her now and I’ve promised her a wonderful home with people who will love and care for her and appreciate her lovely nature. She's a young cat and, although I've given her age as being about 2 I think she's probably younger than that. Meghan came from a house where there were children and a dog but I can't say how often she was actually living in the house rather than on the streets. Apart from being spayed, Meghan is now fully vaccinated and has been microchipped. She shows no sign of suffering pain any longer from that fractured pelvis and broken leg so it's only a matter of finding a home with people who don't see the fact she has one back leg shorter than the other as being an issue.
Information
When contacting us, please mention that you found us through our Cat Chat Homing Page - thank you!