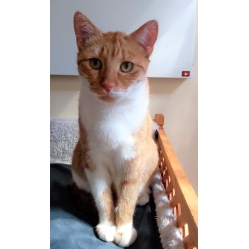 Autumn
UPDATE: AUTUMN WAS HOMED JUST RECENTLY BUT WILL REMAIN ON THE PAGE FOR A SHORT TIME TO BE SURE SHE'S SETTLING WELL.

Gorgeous Autumn is one of many cats and kittens caught and removed from a particular site where they were afforded very little in the way of care or compassion over the past two years. Setting out the traps and trying to remain unseen as I watched them, I only ever saw Autumn twice. The first time was right at the end of September when I saw her enlarged shadow as she walked past one of the traps lit up with torches, her side-on profile clearly indicating she was heavily pregnant. That was quite a worry because these cats had nothing there to give them comfort and the propect of her giving birth outdoors in very cold, wet, weather, was just unthinkable. It was over a week later that Autumn appeared yet again close to a trap and this time, after a bit of shuffling around suspiciously she eventually went into the trap and was caught! That was late on Tuesday, October 6th, and on the morning of Thursday October 8th Autumn's four babies arrived safely into the world. Never having been used to people other than those working in nearby small business units, Autumn was understandably very shy but nevertheless she showed no aggression towards her foster mum and soon let her get close to the kittens, so they were brought up not fearing humans and all now have their very own human families. Despite all being very lively and developing well, though, there was one problem we had to deal with: after a time Autumn and all four kittens had diarrhoea and tests showed up the culprit to be the Giardia parasite, which causes an infection in the small intestine. Without a doubt, what poor Autumn had been living on caused this parasite to take hold and the biggest surprise, really, is that she has been the only one taken from that site to show any such symptoms. It took a lot of vet-monitored worming over a period of time but all is now well. Autumn occasionally still produces some soft motions but no more than any other cat really. Although she was so shy to begin with, Autumn's confidence has grown so much as she now greets her foster mum with such affection, wrapping herself around legs and exchanging headbumps! She does tend to get very excited when her foster mum goes in to play with her and will jump out and grab her ankle! There's no aggression - she just wants the company and the playtime. She's a lovely girl in all senses of that word. Her spaying op well behind her and her vaccinations and microchip all sorted out, it's time for Autumn to find a wonderful home and put her early life of hardship well behind her. Of course, she will be shy and confused with anyone new to begin with, her whole world now turned upside down once again, so anyone thinking of offering her a lifetime home would have to be understanding and patient, giving her time to get used to a new environment and new people. We think she would be fine with other cats as she showed no animosity at all towards her neighbours in the next pen, and she did see her fosterer's dog walk around outside. We haven't been able to test her out with young children, though, simply because the fosterer doesn't have any and we couldn't import one or two due to Covid restrictions, so it's best not to place her with younger children. A home which would allow Autumn access to a safe outdoor space once she's well settled would be wonderful.
Information
When contacting us, please mention that you found us through our Cat Chat Homing Page - thank you!