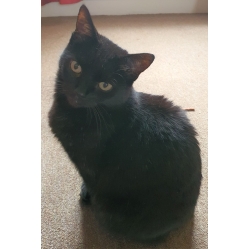 Cheeky
I first met Cheeky when he would be about six months old. He was one of three cats abandoned by the same people when they moved away and left the cats sitting on the streets. One was nursing kittens when I was told about the cats, another was heavily pregnant and Cheeky was a wee boy, possibly one from a previous litter born to one of those wee girls. We got the two girls and the litter of kittens into our care but Cheeky had already been taken in by an elderly lady who just didn't want to part with him. We helped her out by getting Cheeky neutered, vaccinated etc and with vet bills throughout the years and the pair of them were extremely happy together. However the lady, who was just lovely, died a few weeks ago and we took Cheeky into our care. It's incredibly sad that she didn't have the peace of mind in knowing before she died that her boy would be safe though.
So, Cheeky has been in foster care with us and after an initial period of confusion wondering where his mum and his home had gone he settled down really well. His foster mum and I, both being a teensy bit on the sentimental side, like to think his old lady hears us when we reassure her that her boy is okay and being well looked after. He's quite a laid back wee lad and quite chatty, but don't get me started on his vocal "Where you taking me??!" protests in the car! As mentioned before, Cheeky was neutered when he was about six months old and we've made sure throughout the years that his vaccinations have been kept up to date. He's also microchipped and we had his teeth scaled to remove a little tartar just a couple of weeks ago. It's now time for the boy to find another kind, permanent, home, one where he can enjoy the many years he still has ahead of him and where he can get outside to explore once he's fully settled. The street he lived in with his old lady isn't a busy one and is close to some open ground, so it's best Cheeky isn't homed too close to a busy road. He hasn't lived with children, of course, but we wouldn't rule out a family with older children so long as it wasn't too boisterous a household - that might come as too much of a culture shock after living with a lady who was already well into her 80s when she took him in seven years ago!
Information
When contacting us, please mention that you found us through our Cat Chat Homing Page - thank you!