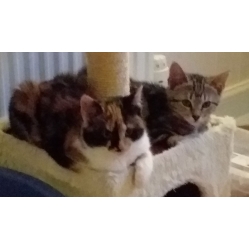 Buttercup and Clover
These two little ladies were born outdoors, living between several gardens, when I heard about them about a week before Christmas. It took a bit of detective work, with a couple of very concerned local people keeping a good lookout, before they were finally tracked down to one garden. The two girls were only about five week sold at the time although Buttercup, who's tortoiseshell and white, was so much bigger than her tabby sister Clover at that time. The kittens were caught on the morning of December 23rd and it was so good to get them into the warmth - the weather then was below dismal, and they were such little things. Their poor mother was still out there though but, fortunately, she obligingly went into my trap without too much trouble that night and I have to say I was very grateful to her because it really was literally freezing.

Of course, the kittens had never been handled so were very shy when they cam into our care, a situation not helped by the fact that mum, Dakota, was shy too. Their patient, kind and experienced fosterers have worked wonders, though, and the wee family has come on so much. They are all still timid with people they don't know, though, but aren't at all aggressive. They have a ball playing with their toys and are very inquisitive and cheeky, but they will take time to settle in a new home. Animals don't know they're in foster care, of course, so it does take time for many to feel safe and confident when their whole world has just been turned on its head again. Ideally, we would like Buttercup and Clover to be homed together but might consider splitting them up if they were offered individual homes where there is already a settled and accepting cat for each of them to relate to. Being shy wee souls it's best to avoid homes with young children, not because the kittens would present a danger but rather because young children make young children noises and can't really understand why it's not a good idea to scamper after a kitten! Older children are a possibility, if they're old enough to appreciate and understand that they need to give the kittens time and be patient enough to let the kittens dictate the pace. As they're now four and a half months old and just heavy enough to be spayed, the girls have had their ops as well as having been fully vaccinated and microchipped. A kind and understanding home which could also offer them the opportunity to explore outdoors once they're very well settled would be just wonderful for Buttercup and Clover.
Information
When contacting us, please mention that you found us through our Cat Chat Homing Page - thank you!