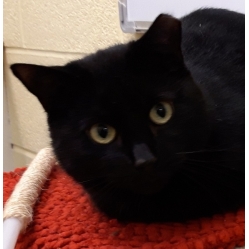 Shadow
Shadow was a feral cat, who came to a lady's garden each day for food. She had two litters of kittens, before the lady contacted us for help. The whole family was trapped and brought to us, and the kittens have all been socialised and rehomed, but Shadow is in a more difficult position, since she's already an adult who's had limited contact with humans. She had learned to rely on people for food however, and is friendly once she builds a bond with someone - she doesn't want to be stroked, and will run away if you try to touch her, but when things are on her terms she will get very close, even sniff you and pat you with her paw at dinner time! She could live as an outdoor/feral cat, but must have regular food and a warm shelter. She also enjoys the company of other cats, so could be integrated into an existing colony. She might also be content in a countryside home, where she could safely wander outdoors during the day, then return of a night. She will probably never be a lap cat, but with a patient and experienced owner who didn't expect too much of her, she could live a semi-domestic life. She loves to play, and as well as her normal cats toys, she likes to roll pens around and chew on whiteboard erasers!

We also have another cat in Shadow's situation, Missy. She was also a feral being regularly fed by a lady, and built up enough trust that she came into the house to give birth to her kittens. She is less confident than Shadow, but would do well in a similar type of home, or they could be adopted as a pair.

These cats need a home away from busy roads, with no children, and with someone who has owned cats before (or even better, someone who presently has a cat). They have had much more contact with women than with men, so may be more comfortable with a female owner.
Information
When contacting us, please mention that you found us through our Cat Chat Homing Page - thank you!