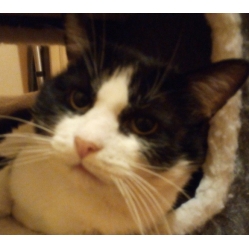 Gaudi
Gaudi has spent most of his life as a stray, being fed by a kind couple. They patched him up after he got into fights with other toms, and had him neutered, and eventually he decided to move into their house. Unfortunately he didn't want to stop fighting though, and began to bully the old cat they already had.

After coming to the rescue, Gaudi became very stressed, which led to him developing a serious urinary blockage. After multiple vet visits, lots of medication and TLC in a foster home, he is now happy and healthy again, but new owners must be aware that he's prone to this condition, especially when coming into a new environment. He will need close monitoring, and extra care to ensure he is happy and comfortable. He may also have some arthritis in his back legs, and there is a bald patch on his head from an old wound, which has now healed. This poor cat has really been through the wars.

Gaudi is a big chunky lad, and aside from not liking sudden changes to his surroundings or routines, he's quite a confident character. He will happily sit on your knee to be fussed, and lets you know when it's dinner time. He's used to having independence, but is learning to let people take care of him in his later years.
Information
When contacting us, please mention that you found us through our Cat Chat Homing Page - thank you!