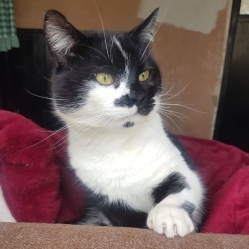 Jeffrey
This extremly handsome chap is Jeffrey who came to us via the vets where he'd been taken in as a stray. A kind lady had been feeding him for the past 3 years but noticed he'd been in the wars and had a nasty facial injury so she contacted the RSPCA who agreed to pay for his treatment and have him neutered and tested. Unfortunately his blood tests revealed he was FIV+ and the RSPCA were unable to house him at the time so he came to us.

He's a lovely friendly laid back boy but quite independent and likes to do his own thing. He's not really a cuddly, lap cat and whilst he doesn't mind being picked up he doesn't really enjoy being held.  As Jeffrey is FIV+ he would need a new home with someone that either has a cat proofed garden or lives in a very remote rural area. Although he isn't an aggressive cat so I personally feel the chances of him infecting other cats would be very slim, he currently lives with FIV and non FIV cats and doesn't bother any of the other cats. Whilst not essential ideally it would be nice to find him a home with someone who has FIV experience and understands the virus. To find out more about FIV visit: F.I.V. (Feline Immunodeficiency Virus)

We don't know how old he is sadly but think probably around 6ys old. He doesn't seem bothered by our dog but we're not sure whether he'd be ok with children but he's a confident boy so I don't think children would bother him to much.
Information
When contacting us, please mention that you found us through our Cat Chat Homing Page - thank you!