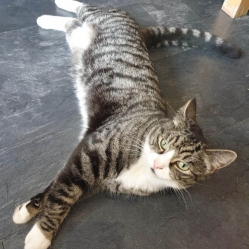 Bug
Bug was originally adopted from the RSPCA in March 2016, they thought he was about 8 months old and had been a stray – he’s a big puss with a big personality. He is a constant tail wagger, most of the time he likes a head rub, or he will jump on the kitchen table then onto your shoulder if he wants a cuddle, he’s pretty agile!
He does get grumpy and will scratch or bite if you give him attention when he is not up for it so you need to read the signs and he needs an adult-only home with no other pets.
So far, so typical but unfortunately some things changed during lockdown which really stressed him out and made him miserable:
The neighbours got 2 new kittens and a strange cat also started appearing in the garden and they all came into the house at night, stealing his food, bullying him and spraying on his territory
Information
When contacting us, please mention that you found us through our Cat Chat Homing Page - thank you!