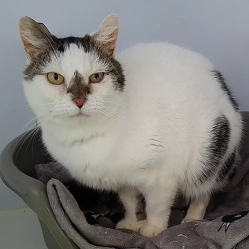 Bronco
Meet Bronco he has been with us for almost 6 months. He came in literally covered in his own poo. He was so stressed he was sitting in it and his back legs were burnt and sore. Bronco is also a cat who suffers from flu symptoms when stressed and boy has this poor boy been stressed! Covered in fleas and weighing less than 3kg which is tiny for a neutered tom. He was from a multi cat home and supposedly indoor only but we think. That he was never given any attention. After numerous tests our vet has reached the conclusion that Bronco suffers from IBS which is probably caused by his stress. He is on a grain free diet and thank goodness things have slowed slightly at the rear end! He has put on weight and is going out into the catio which he likes. We are looking for such a special person to adopt Bronco. He needs someone who will wait for him to make any moves. He may never be able to make that leap of confidence but in the right home and with time maybe. He needs to be able to do things at his own pace. He could respond well to living with another cat. He has had a horrible time we almost feel he has had some kind of cat breakdown.
Information
When contacting us, please mention that you found us through our Cat Chat Homing Page - thank you!