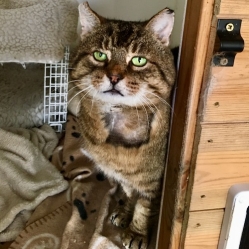 Sam
Sam had been hanging around some stables for at least five months or so.  A lovely lady who has a horse there started feeding him in time, as it was clear that he was not going anywhere.  Poor Sam ate as if he had not seen 'proper' food for a very long time.  It soon became clear to her that he was not neutered and it showed in his appearance.  He had obviously been in several fights.  Anyway, the lady contacted us to see if we could help.  Initially, it was planned that Sam could be returned to the stables, after being neutered etc, but as time went on it was clear that this not going to be possible. Two other resident, outside cats live at the stables and are very well looked after, and they were intimidated by Sam's presence so the owner did not want him back.  So, after trapping this rather rough, tough looking lad, having him neutered and treated for fleas and worms, he came into the care of LPCR.  He has also been FeLV and FIV tested, with negative results.  Sam is a bit of a mixture even now.  He often looks really fierce, with his ears down whilst hissing at the same time, like a really tough guy.  He will usually start purring though whilst going on immediately to enjoy strokes and a general fuss!  Though Sam seems to now realise that food will keep coming, he still wants more and more.  He had clearly been very well fed at the stables and it is now a case of giving him a little less than he was used to, with the aim of gradually reducing his weight.  Hopefully, he has plenty to keep him satisfied; the thought of him being hungry is not a good one.  Sam would appear now to want a quiet life, with plenty of home comforts and as much pampering as possible.  Who knows how much time he has to make up for? Despite his efforts to sometimes make you think otherwise, Sam is a very affectionate and friendly boy who has loads of love and purrs to give to the right person once they have shown they can be trusted.  He purrs non stop for ages and then will often go over onto his back to show his tummy.  He has so much love to give.  Sam will be vaccinated for flu, enteritis and leukaemia and microchipped before he is adopted, and also treated for fleas and worms again.
Information
When contacting us, please mention that you found us through our Cat Chat Homing Page - thank you!