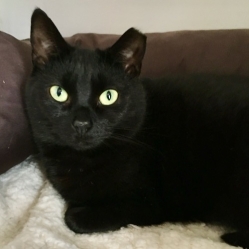 Bonnie
Bonnie is one of three little girls in our care who were born outside.  When we were asked to help by trapping them and getting them neutered, they had all had at least one litter of kittens, who had all died outside.  Some were pregnant again; these facts alone are heartbreaking so we have to move on because it is in the past and we are powerless to turn back time.  The original plan was to trap the girls and have them all spayed and treated for fleas and worms and then to return them to the same area ie typical TNR work which I am all too familiar with - and have always found emotional, if not impossible when it comes to the 'R' bit!.  This took some time but it was done eventually.  After trapping the first cat, the one who is probably the most cautious now, I knew I had a lot of thinking to do.  I had seen where these girls lived, in one of two places, either a back yard of a rented house, living in amongst filth, including old chairs overgrown with all sorts of foliage and rubbish dumped on top and in every nook and cranny possible or in amongst rubbish in another small area, fronted by barbed wire.  A lovely lady had been feeding the cats as best she could but was faced with so many obstacles including no safe, clean place to leave the food, which understandably was often instantly covered in flies etc, along with invasions of slugs.  There were no accessible, safe places to leave any sort of shelters and it was a very busy area with cars zooming around all the time.  The girls had never been touched and were probably coming up to two at the time so would be described as feral.  Whilst this to me is just a general term to describe cats who have not had a good start in life because of their mum's circumstances at the time she gave birth, I did realise that they were not the most sensible of candidates to consider taking into my care.  However, whilst my head was telling me to be sensible, my heart told me that there was no way I could return the girls to their previous 'home'.  Their lovely feeder was in full agreement.  So, all spayed etc, over time, all the girls ended up in a pen.  To begin with, it was a little daunting when going in to feed the girls and clean litter trays etc.  One or more of them was often high up, looking down on me whilst hissing and spitting when I walked into the pen, with me wondering whether they were going to jump on my head!  Fortunately, they never did.  Understandably, they were terrified for a long time and very wary of me but as time passed, they began to realise that they were safe - and that food would keep coming too.  As cat lovers we all know how clean cats are and these beauties are typical; from the very beginning, they all used a litter tray, though it was the first time they had ever seen one of course.  The girls were very, very skinny when I first came across them and I seem to recall that there had to be a delay before one could be neutered  because of being so underweight.  Anyway, they have all put on weight now, for sure.  Bonnie is the most confident of the girls and, in the right hands, will flourish even more.  She now enjoys full strokes and is showing more and more affection every day.  She is keen to interact and loves being stroked.  Though I have not attempted to pick her up, she really is a true little sweetheart who clearly has a lot of love and affection to give to a caring, patient and understanding owner.  She gets on well with her two sisters.  One of them, Millie, is now also featured and both of these girls have started a course of vaccinations.  If all goes well, ie getting them to the vets quite soon again for their second vaccinations, these two delightful girls will soon be ready to go to their very own home, their first one ever, Bless their little hearts.  It is hoped that the two girls will be homed together.  Whilst it would be wonderful, I realise that it is pretty unlikely that all three girls could  be given a home together.  The third little girl, not yet featured as her vaccinations have not yet been started, though more cautious in many ways, is also very playful.  I think that she would be okay to be homed on her own, with the right kind of owner.  If ever you would like a general chat, obviously with no commitment, please do contact us.
07477926973/[email protected]  Thank you very much for reading.
Information
When contacting us, please mention that you found us through our Cat Chat Homing Page - thank you!