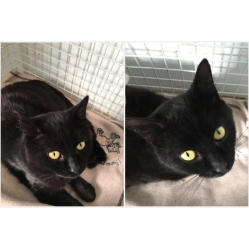 Paddy
Paddy is thought to be around three years old, certainly a young cat, though this will be checked at the vets when he next goes.  Despite his young age, he is known to have been living outside for at least six months.  It seems that he is yet another beautiful soul who was left behind when his so called owners decided to move home.  A local lady did some investigating via local sites.  Anyway, I trapped him and fortunately though he was very wary of the trap, he was hungry so it was quite a quick process.  Since then, and after an initial vet visit, he has proved to be a little sweetheart, another one who deserves only the best of everything for the rest of his, hopefully, long life ahead.  He absolutely loves his food, perhaps remembering when it was not so regular and so plentiful, bless him.  He likes being stroked and is friendly and welcoming when you are with him.  It is inevitable that those of us who experience the joy of fostering cats become attached to those in their care, whatever their natures,  This is definitely the case with me and this beautiful boy; it wasn't exactly difficult!  An update will be added when more of Paddy's personality is seen but he is loving and easily loveable, that's for sure.  A donation towards costs will be requested and a home visit will follow for anybody who adopts this little beauty in time.  Thank you for reading.  07477926973/[email protected]
UPDATE  Paddy has now been moved into a pen from where he was previously being fostered.  This move, understandably, has made him feel a little unsettled but he is pretty relaxed again already, though the move was very recent.  Though he is just a little cautious still, he is still friendly to me and enjoys being stroked and loves you spending time with him, well, it seems that way.  He is not so welcoming towards most of the other foster cats he has come across so far as the growling and generally fierce sounding noises indicate; thankfully it is all through open meshed pens so little physical contact is possible.  This is only ever for a few minutes at a time and always supervised.  Paddy is booked in for a first vaccination so his general health can be checked then but all the signs are that he is a healthy young cat.  In time, it is hoped that the outward signs of aggression towards the other cats will calm down, if not disappear altogether.  It may well be his way of saying that he is feeling a bit out of his depth and generally unsettled.  I expect Paddy to become even more of a very friendly, loving little boy who will be devoted to his owner/s and who will relish spending time with them especially if they want to pamper and love him back.
NOW  Paddy has calmed down a lot more where the other cats are concerned and is becoming even more of a little sweetheart.
FURTHER UPDATE  Paddy has actually been adopted but will remain featured here until his adoption has been confirmed.  His owner and her family absolutely love him to bits and definitely want to keep him. However, the lady is undergoing various tests and procedures at the moment regarding her own health and feels it only fair to wait until there is an outcome from these before any final confirmation.  2/21 Paddy's wonderful owner feels that it would be better all round if Paddy comes back into care.  Her test results have confirmed that this lovely lady needs treatment for her condition and this will be spread over several months.  Enquiries about him are very welcome. NB  Paddy IS now back in the care of LPCR>   07477926973/[email protected]  Thank you.
Information
When contacting us, please mention that you found us through our Cat Chat Homing Page - thank you!