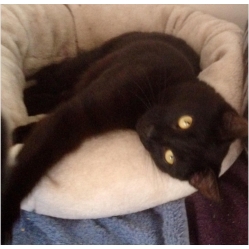 Ollie
Ollie was found living outside with another long term, outside cat, who has shelter and regular food and is neutered, and who appears to be content where he is.  When Ollie appeared, and after checking locally, the story emerged that this little boy had been left behind when his 'owners', a loose description, had moved out of their house, taking their new puppy with them, but leaving Ollie behind.  It is not thought that this beautiful boy was ever an actual part of the household, living in a makeshift shed by all accounts.  Apparently, the new addition cost quite a lot of money and we pray the puppy will not be another novelty to be disposed off in time.  Anyway, it appears that very little money was lavished on THIS innocent lad, he was not neutered and was very skinny.  When he was fed, he gobbled everything in sight, poor little man.  Though he appeared to be quite sociable, he would not come near enough for cuddles or to be picked up.  After ensuring he was definitely not owned, Ollie was trapped and neutered and health checked etc and officially came into our care.   His coat was pretty rough looking to begin with but it is now really sleek and shiny as, to my mind, only black cats can be to the same extent.  He loves being stroked and generally shows affection in many ways.  Bending down to deal with litter trays, with Ollie hovering above your head, is often a very interesting experience.  He will often, gently I hasten to add, sort of pat your hair, whether wet or dry, with a paw.  This is a little cute ritual that happens regularly.  Perhaps it would not be so cute if the claws were out of course, but they never are.  Whilst he gets on well with most of the other cats in care, he can be a bit of a bossy little lad with the odd one.  Ollie is a gorgeous boy who is fully chilled now but he may well be ultra timid to begin with when he is adopted.  He is a real joy though and any wait involved for him to be relaxed etc will be so worth it as I am lucky enough to know.  He has a cheeky, very loveable air to him, not that any persuasion is ever needed to really love all of these adorable babies, whatever their personalities are like!  Ollie and Alfie share a living space and get on well.  If they found a home together that would be great, but it is not essential and depending on other circumstances.  Thank you for reading.