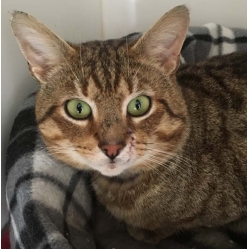 Timmy
Timmy was found living on the streets in a pretty bad way, though you wouldn't know it now.  It looked as if he had been in a fight with another poor, unnneutered and so defensive male as he had a small chunk of flesh hanging loose from his face, probably from another cat's bite.  One photo gives an idea of what this injury was like, though this was after it had been cleaned up.  It was pretty horrific to look at to start with, poor lad.  It's not known how long it had been in such a bad way.  He has been treated very successsfully and is now showing how very, very handome he is.  There is only a tiny bit of evidence of his wound now, where the stitches were,at the side of his nose, though this last stitch will fall out itself any day now.  UPDATE:it has fallen out now so our dear Timmy is restored to his full former beautiful glory.  It's early days, but Timmy has settled very well and appears very chilled.  He is certainly tucking into his food!  It's very common of course for poor souls that have often been scavenging for food for some time to eat any sort of food that is offered to begin with, once they are in a safe environment.  In time, preferences do often emerge which is usually a good thing and helps their digestive system. Timmy is now enjoying food that suits his system well and he is cerainly enjoying it, little love that he is.  Timmy enjoys lots of strokes and appears to be pretty laid back.  He is a gentle, easy going, friendly young boy, perhaps around three years old, and he has a lot of love to give and he really enjoys lots of attention and love coming back his way.  I often see him playing with his toys and he seems to be very settled and is a contented young boy.  He is a beautiful 'sturdy' cat and could do with losing a little weight, though he is definitely not fat to look at.  Now he knows food will keep coming regularly, I am hopeful (fingers crossed) that his appetite will settle down, which it is already doing.  He is in good health generally, according to the vet's comments.  He has had a full course of vaccinations.  Timmy will not necessarily show off his best side to anybody he meets for the first time.  He can act a little shy and even disinterested which is not him at all!  He honestly is an extremely sociable boy.  He appears to absolutely love human company and to thrive on it.  However, he is also very good at playing on his own and dives about like a young kitten at times.  I often hear him thundering around, bless him.  Needless to say, I love him to bits, as those of us who foster these dear souls can't help but do.  Thank you for reading. PS I know this is obvious but a general enquiry does not commit anybody to anything.  If you want to adopt a cat, you will only want one that, potentially, seems like a good match for you and your circumstances, wherever the cat is now.  Like you, we want to try to find each precious cat a home that seems right for them.  Even experienced cat owners are often not right for every cat.  As we know as cat lovers, they are all individual, and don't we know it! x
07477926973/[email protected]
Information
When contacting us, please mention that you found us through our Cat Chat Homing Page - thank you!