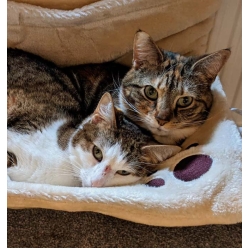 Luna and Poppy
Poppy (tabby and white) and Luna (tabby/tortie) are sisters and are very much loved by their current owner.  He really does adore them and is heartbroken at the thought of having to part with them.  However, he is emigrating and it is not possible for him to take his cats with him, which is why they need a new home.  Poppy is a pretty small little girl who is very cuddly and affectionate and enjoys being close to people.  She can be wary of new people or animals, but of course as cat lovers we are used to and allow for this.  She is happy to be picked up and carried and has been known to fall asleep on her owner.  Luna is pretty, just like her sister, and generally a little more curious and outgoing than Poppy.  She likes meeting new people, though generally is a pretty quiet cat.  She purrs very loudly though does not meow, in fact her owner doesn't think he's ever heard her meow.  Luna is not a fan of being held and will try to wriggle free, but she is never aggressive.  When she wants your attention, she will often stand or sit on you, staring at you, purring, until you cave in!  It's not exactly hard work to return the affection to any gorgeous animal, in fact it's a joy as we know.  They are both reasonably okay with being groomed, though will often try to escape.  The girls are young cats, hopefully with ten, fifiteen or more years ahead of them.  If they end up being adopted separately, whilst it is not the preferred outcome, it is felt that they would both be okay with this.   If you are interested in having just a very general chat, based around the girls, do get in touch. It obviously does not commit you to anything at all.  Thank you for reading.  07477926973/[email protected]
Information
When contacting us, please mention that you found us through our Cat Chat Homing Page - thank you!