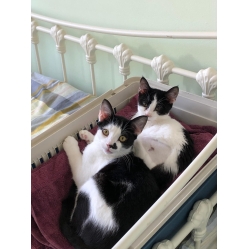 Jack and Jill
Jack and Jill are 6 month old kittens moved to us from another rescue as they were full. They were a little shy and needed time for their confidence around people to be built up. They belonged to an older lady who had died and then stayed with her sister for a while before they went into rescue. They had been neutered 5 days before they arrived with us on a Friday evening and were moved to their foster home the next morning. By Sunday both were showing signs of cat flu with runny eyes and noses. Both went to the vets with high temperatures on the Monday and were back at the vets by Friday, with neither eating. By Friday evening Jill was so dehydrated she was rushed to the emergency vet, where we were told it was touch and go as to whether she would survive. She was discharged a week later but still not eating and spent another week being syringe fed before she started eating again. She would sit next to the food bowl with her head back and mouth open looking like a baby bird waiting for her mum to bring her a worm! Both are now looking incredibly well, have put on weight, are playing together and are beginning to be more confident. Neither particularly like being picked up at the moment but both like to be stroked and happily purr away. Although Jill is more confident than Jack, he is more laid back and once he gets to know you enjoys laying next to you and being made a fuss of. To flourish they need to be in a quiet household to limit stress, no children or older children, no dogs and preferably no other cats. They are very well at the moment but there is no way of knowing whether they will now be immune or may have an occasional relapse. However, now she is bigger and stronger the symptoms should not be effect her as badly. If you can put up with a possible occasional snotty nose, Jack and Jill will develop into beautiful natured cats. Both are clearly fighters and they now need a chance of a forever home.
Information
When contacting us, please mention that you found us through our Cat Chat Homing Page - thank you!