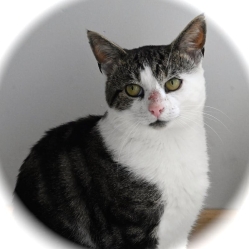 Buddy
This handsome fella is Buddy! Buddy is a big lad with a gentle temperament who likes a fuss. He’s been a stray and was found in a bit of a mess; he’s hoping that the state of his nose won’t put people off! It’s a battle scar from when he’d been attacked, probably a territorial battle. It’s healing. Four-year-old Buddy will be so rewarding as he’s affectionate and has a lot of love to give. He’ll be so relieved after the trauma he’s been through to find a quiet home with kind people, maybe with older children but probably not with other pets. Could you give Buddy the loving home he deserves after his trials and tribulations?
He’s been vaccinated, microchipped, and flea and worm treated.
Information
When contacting us, please mention that you found us through our Cat Chat Homing Page - thank you!